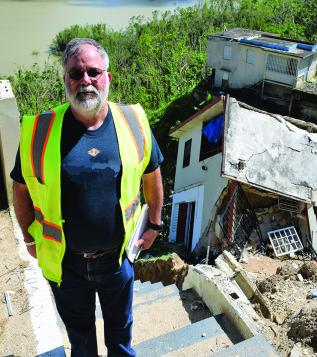 Constitutive modeling was the topic of Dr. Pradel's research during his doctorate and post-doctorate studies. His future research pursuits will incorporate lessons learned during his 20+ years of engineering consulting experience. The application of the strength reduction method to geomechanical stability problems, has shown that very simple constitutive models can have a profound impact in the way engineers design dams, piles, levees and slopes. There is a need for additional simple geomechanical constitutive models that can be used for both drained and undrained situations, and that practicing engineers can use in their designs.

Dr. Pradel's research has involved numerical modeling, including static and seismic design, as well as the optimization of structural systems in unstable slopes. In urban environments with hillside developments, e.g., in most Cities of Southern California, drilled shafts (a.k.a., stabilizing piles) are often used by to resist the large lateral loads imposed by landslides and to improve slope stability in general. The design of stabilizing piles, with or without tiebacks, is a classical problem of soil-structure interaction. Unfortunately current design methods for the design of stabilizing piles, soil vary widely and can result in major differences in scope and performance. Hence, there is still major research needed in this area regarding modeling (2D and 3D), arching of soil between piles, LRFD factors, discontinuous soil failure modes, and progressive failure mechanisms.

Dr. Pradel has also conducted research in the area of geotechnical earthquake engineering (earthquake induced settlements, seismically induced landslide displacements, and ground motions) and published several papers in this area. He was part of the ASCE team that visited Japan after the magnitude 9.0 Tohoku Earthquake of March 11, 2011, and published several papers about the behavior of slopes, dams and levees. He visited Nepal to study the damages related landslide activities that took place in the Kathmandu Valley during the Ghorka Earthquake of April 25, 2015 and was part of the Geotechnical Extreme Event Reconnaissance team supported by the National Science Foundation that collected important post-disaster data in Puerto Rico after Hurricane Maria, which made landfall on September 20, 2017.