Recent grads can quadruple the impact of their gifts through Nov. 24 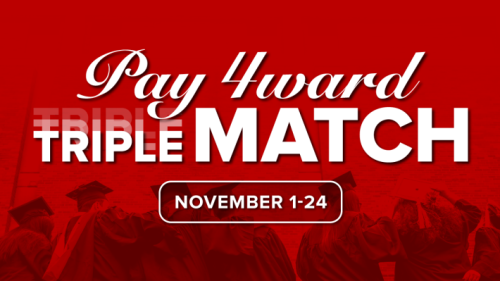 Through November 24, all 2012-2021 College of Engineering graduates who give to any fund in the college will have their gift matched 3-to-1 by generous engineering alumni. Gifts of up to $1,500 will be matched until the match limit is met.

Since the campaign launched in 2017, 683 donors have invested nearly $500,000 to enable the College of Engineering to pursue its mission to develop the next generation of innovators who will solve problems facing our communities and develop solutions to improve our world.

“Every gift matters and the Triple Match campaign is a great example of how donors come together to make quadruple the impact for the College of Engineering and Knowlton School,” said Anne Strychalski, associate director of annual giving and reporting for the college.

The 2019 Pay 4ward Triple Match campaign has been the most successful in history, raising $38,343 from recent graduates and $153,732 total with the matching funds.

The campaign was inspired by Jim Dietz ’69, ’70 and his wife, Pat, who first initiated a conversation about the Pay 4ward Triple Match and have led this effort as matching donors ever since. They have since been joined by several other alumni and friends who also give matching gifts to support the unique initiative.

Knowing the impact receiving a scholarship had on their lives, the Dietzes have prioritized giving back to Ohio State. The sense of pride gained from contributing to future students and the university is a feeling like no other, Jim explained, and he wanted other alumni to experience it.

Their one regret is that they didn’t start giving to Ohio State sooner.

“We had four children very close in age, so we never felt like we had the financial wherewithal. But you know what? We did,” Jim recalled. “I wish we had done it, because making a contribution to Ohio State, either to scholarships or other means, is just so satisfying.”

Recent College of Engineering graduates who want to pay forward and make four times the impact can learn more about this year’s campaign and make a gift online via Buckeye Funder.