New project brings AI to environmental research in the field

A new 30-foot tower has sprouted on the edge of The Ohio State University Airport, but it has nothing to do with directing the thousands of planes that take off and land there each year. 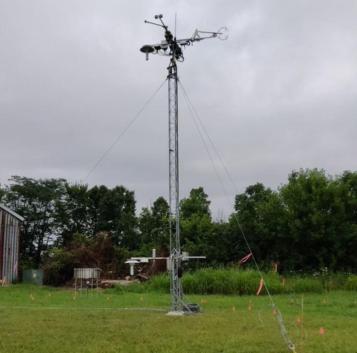 Instead, this tower is the focal point of an Ohio State research project that will explore using artificial intelligence and a variety of sensors to monitor environmental conditions on a minute-to-minute basis.

A key part of the project is the use of machine learning to interpret the data as it is collected, said Tanya Berger-Wolf, director of Ohio State’s Translational Data Analytics Institute (TDAI) and the leader of the project.

“This is a unique opportunity for our researchers to help understand environmental conditions in urban areas, such as carbon emissions, noise and air pollution, and how it changes in real time,” Berger-Wolf said.

“We will use artificial intelligence and machine learning models to take all the complex information we collect and get insight out of the data, such as the impact of emissions from the airplanes on the local environment.”

The tower was designed and built by the National Ecological Observatory Network (NEON). NEON includes 81 permanent field sites operated by Battelle and funded by the National Science Foundation. These sites collect long-term ecological data across the United States to better understand how ecosystems are changing.

Ohio State is the first to host a mobile, temporary field site of this type. Currently, the university is scheduled to host the tower for two months. It is the first such system to be located in Ohio, Indiana or Illinois, Berger-Wolf said.

An important goal of the project is testing how to do the sophisticated computing needed for this research in the field, far from any major computer servers, she said.

“Being the first mobile deployment of this kind, we need to test how to collect the data, what conditions we may need to tweak, what sensors we need to use and the analytical methods we need to deploy to interpret the data.”

Researchers are collecting data on a variety of factors, such as air temperature, wind speed and direction, and humidity, that may affect carbon emissions and noise and pollution levels. In addition, soil sensors will measure carbon levels, moisture and temperature.

“Interpreting all that data is one reason why AI is integral to this effort,” Berger-Wolf said.

The goals of the project go beyond just testing the new platform. It will serve as a pilot study for two new NSF-funded AI institutes at Ohio State, led by TDAI affiliates, that focus on edge infrastructure for AI.

In addition to TDAI, faculty and students from Ohio State’s College of Engineering, College of Arts and Sciences, and Sustainability Institute are also conducting studies based on the data that will make important scientific contributions.

For one project, Huyen Le, an assistant professor of geography and core faculty of the Ohio State Sustainability Institute, is leading a team that installed a sensor that measures air pollution – specifically fine particulate matter, such as that produced by car and airplane traffic.

“Most of the studies that have looked at the effects of air pollutants on human health measured exposure at homes,” Le said. “We need to quantify how much exposure people receive as they move around during the day, such as in traffic and at the workplace.”

With that information, Le and her team want to estimate the potential impact of pollution exposure on health, including respiratory and cardiovascular diseases, stress and anxiety.

Le hopes to combine this data with data from around Columbus to provide a holistic view of pollution around the city and how it impacts health.

Because this is the first use of the tower in an urban area, Berger-Wolf hopes to secure funding to move the tower to another site in Columbus after the two months at the airport.

“It’s important to have a setting in an urban area because urban ecosystems are the ones where the interface between nature and humans is most dynamic and acute,” she said. “And we really don’t have enough information about how our human activity affects natural ecosystems and affects the environment.”

As it happens, Ohio State’s Columbus campus presents a host of options for studying urban impacts on the environment and other sustainability-related topics.

John Horack, the College of Engineering’s senior associate dean for research who oversees the Ohio State airport, co-led the project to secure the current tower site.

“This project is a unique opportunity to use one of our biggest assets — in the literal sense — for interdisciplinary research,” said Horack, a professor and Neil Armstrong Chair in Aerospace Policy in mechanical and aerospace engineering and at the John Glenn College of Public Affairs.

“It’s a great example of how Ohio State can apply research excellence at scale, integrating unique resources and exceptional people from very different perspectives, to discover innovative solutions and answers to important questions.”

Other faculty co-leading the project are Anish Arora, professor and chair of computer science and engineering, and Gil Bohrer, professor of civil, environmental and geodetic engineering.

Is our energy grid ready for the future?