Posted: September 4, 2019
Engineering Professor Karen Dannemiller isn’t fond of the idiom “out of sight, out of mind.” In fact, much of her research is focused on things our noses breathe in, but our eyes can’t see, like formaldehyde.

Dannemiller began studying formaldehyde’s presence in the indoor environment while pursuing her first engineering degree at Brown University. Her interest and innovation in the topic continues today as she leads Ohio State’s Indoor Environmental Quality Laboratory.

Formaldehyde is a colorless, strong-smelling gas used in making building materials, furniture and many household products. At room temperature, formaldehyde can vaporize—or off-gas—out of these products into the air. It irritates the nose, eyes and throat, and for some, exposure may cause wheezing, asthma attacks and other respiratory symptoms. According to the American Cancer Society, formaldehyde exposure also has been shown to cause cancer in laboratory test animals.

Utilizing a National Science Foundation grant, Dannemiller’s team developed an inexpensive way to detect indoor formaldehyde levels easily and quickly using a smartphone app and color-changing badges placed in the home. The team includes Assistant Professor Rongjun Qin, who serendipitously introduced himself to Dannemiller on the very day she was wondering how to convert a smartphone photo into a usable measurement. With a joint appointment in Civil, Environmental and Geodetic Engineering and Computer and Electrical Engineering, Qin is an expert in digital image processing. Other partners include the citizen science group Public Lab and collaborators at UCLA, SUNY Buffalo, and Castner, Inc.

The prototype color-changing badges were manufactured by industry partner Morphix Technologies specifically for the app. The user takes a smartphone photo of the badge immediately after opening the package and placing in a room. After 72 hours of exposure, the user takes another photo of the badge. The SmART-FORM app analyzes how much the color has changed from the original bright yellow, calculating the hue change into a parts per billion (ppb) measurement—a process known as colorimetric analysis.

Since low levels of formaldehyde are common in the air, a concentration level is more informative than basic “yes or no” detection, said Dannemiller. The app’s detectable range is 20–120 ppb and the standard deviation of readings was 10.9 ppb in field testing, which she described as suitable for a screening tool.

“Concentrations matter, because different people are sensitive to formaldehyde in different ways,” she explained. “For instance, maybe you have small children with asthma in the home.”

In 2010, University of Alabama at Birmingham Professor Gerald McGwin and colleagues did a systematic review of the published literature on formaldehyde and asthma and concluded that there is a "significant positive association between formaldehyde exposure and childhood asthma.”

The open-sourced app, available for Apple and Android devices, also provides information on recommended formaldehyde levels and how to reduce exposure if the concentration is high. As a unique “citizen science” component, users are given the option to upload their results and complete a survey to create a national database of formaldehyde levels.

Working with the technology commercialization team in Ohio State’s Corporate Engagement Office, Dannemiller said  that further efforts are currently underway to create the final version of the badge prior to commercialization. She estimates the initial price will be $25 for a package of five badges. 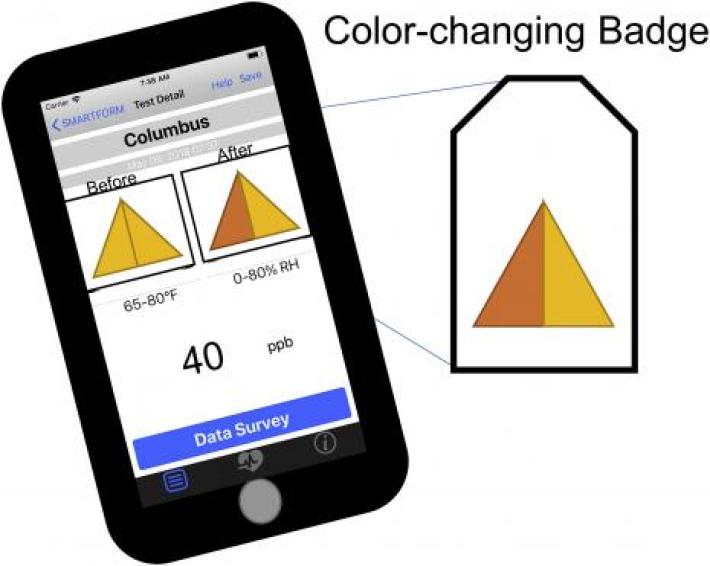 Based on user feedback received during beta testing, the team recently launched a new version with an improved user interface. “The final feedback consensus was that the app and badges were really easy to use,” Dannemiller said.

Engineering students were vital to the app’s development. “Undergrads David Kormos and Paige Frey and grad student Sarah Haines played key roles,” she said. “And while he was a computer science and engineering grad student, Siyang Zhang really was our primary coder.”

Even with initial commercialization on the horizon, Dannemiller and Qin are continuously working on improvements to the app and the badges, as well as submitting proposals for additional federal funding.

“While we’re starting with formaldehyde,” Dannemiller said, “I think there are so many other indoor contaminants that we could expand to with this technology.”

A new way to measure allergens in your home

Ayanna Howard named next dean of College of Engineering