Students at a central Ohio suburban high school have been given a tall order: Design a set of low-cost air quality monitors for installation on their school buildings to transmit data that will be used for curriculum and by the general public.

The assignment came from two Ohio State professors — with a promise to provide expertise and assistance. 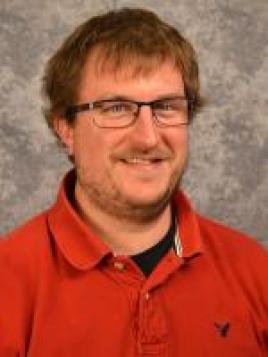 Andy May in civil, environmental and geodetic engineering and Ayaz Hyder in environmental health sciences in 2016 received a grant from the National Science Foundation to deploy low-cost air quality sensors that provide high-quality data for better estimates of personal exposure to air pollutants. A unique facet of the project is that the professors work with a team of citizen scientists: the high school seniors and their engineering teacher, who also will help develop teaching materials using the sensor data.

The Ohio State air quality monitoring is one of 13 capstone projects for the seniors, who are studying an engineering curriculum called Project Lead the Way.

“The students in the Ohio State project are learning electronics, programming, sensors, information technology, project management, documentation, logistics and communications,” says Rusty Herring, engineering teacher at Hilliard Davidson High School. He is an Ohio State alumnus with a bachelor’s degree in welding engineering and a master’s degree in education, which he obtained after working in project management engineering for 10 years with Procter & Gamble Co.

Now in its third year, the air quality project is growing to incorporate two more school districts and the city of Columbus Public Health department. May and Hyder meet regularly with the Hilliard students and their teacher as mentors.

“From an educational aspect,” May says, “it’s been pretty amazing so far.”

Hilliard Davidson student Emma Wood explains that she and her two teammates have distinct roles working on the monitors.

“Our strengths make the project move forward more efficiently,” she says. “I’m the project manager. I help everyone stay on track.”

Zach Augustine calls himself the technical expert. “I’ve taken a lot of design courses and learned CAD to work on the 3-D modeling,” he says, noting that he’s designing the sensor enclosures. Ben Charlson works on the air quality monitors’ internal wiring and components that will collect data on gases, particulate matter, temperature and humidity.

May, whose research interest is the fate and transport of atmospheric pollutants, explains that the sensors, an extension of previous research he conducted by placing sensors on campus buses, will monitor carbon monoxide, ozone, nitrogen dioxide, particulate matter, and temperature and humidity in the air.

The Hilliard students are exploring ways to make the sensors wireless and powered by solar panels. They are running connections from the sensors to a computer program that reads the values and will send them to a website.

“Eventually the data will be available to the public,” Wood says. “There will be 15 sensing stations on 15 buildings in the Hilliard City School District.”

The project will demonstrate how engaging with the public can help translate “smart” science to actions of consequence, such as avoiding areas with poor air quality or identifying areas potential solutions, says Hyder, who determines where the monitors will be placed so the collected data can be compared with socioeconomic factors.

“I’ve always struggled with the idea of equity. ‘Smart’ doesn’t just mean better. Are we doing things in an equitable manner?” says Hyder, who was hired at Ohio State as part of the Translational Data Analytics Institute. He points out that air quality has always been studied in public health with a keen awareness that a study in which people at the lowest socioeconomic levels are at the highest risk of exposure and yet also the least equipped to cope with adverse health outcomes associated with poor air quality, such as asthma attacks and cardiovascular events.

“Hilliard is a good case for that, because there is a north-to-south socioeconomic gradient in factors such as household income and employment rate,” he says. “From Dublin on south there is a decline in socioeconomic status. One of the ways we’re trying to capture that is through the placement of these sensors.” 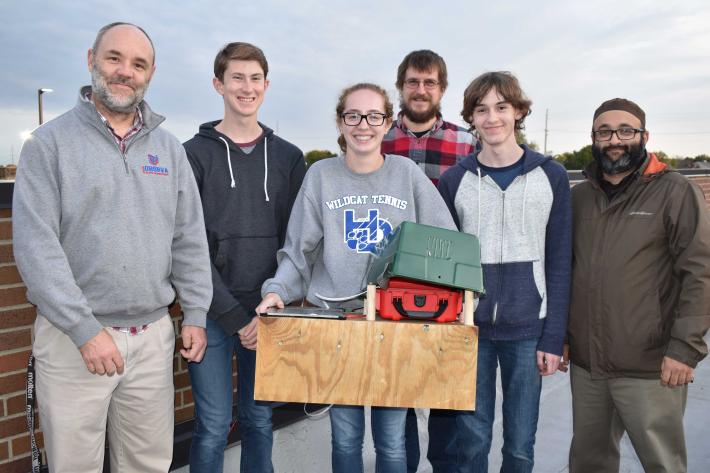 Once the data is collected, May, Hyder and the Hilliard students, with Herring, plan to leverage it beyond the engineering courses to science and math classes in Hilliard high schools and middle schools and then outside of the district. May is working to install two more sensors with Columbus Public Health and teachers at both Worthington-Kilbourne High School and Thomas Worthington High School, who want to use the collected data in biology and environmental science classes. May and Hyder will be integrating the project in Dublin City Schools’ new Emerald Campus, a nontraditional high school innovation that lets students choose from various Career Exploration Academies including biomedical, business, engineering and IT.

“We think we can create a curriculum for grades seven through 12,” Herring says, “with activities that use the project and the data to teach science, air quality, environmental science, math and statistics. It’s all there. It’s all authentic.”

Each year, the students have progressed on the project and successfully passed it along to the next class of their peers. Of the 11 students who have worked with May and Ayaz, six are now attending Ohio State.

Mike Faltas, who is a second-year Buckeye studying mechanical engineering, says working with May and Hyder gave him insight into how real engineering projects work.

“The communication between parties was something I never experienced before, as well as the cooperation towards a solution. The professors were phenomenal resources when we needed guidance and offered up a lot of advice into what we should be doing,” he says, adding that he picked up planning and communication skills along the way.

by Joan Wall, Ohio State Office of Energy and Environment

A new way to measure allergens in your home

Ayanna Howard named next dean of College of Engineering