It began as a speculative design, a prototype system of pre-cast, perforated and self-buoyant concrete vessels to float a forest of trees in Lake Erie, Toledo, to reduce harmful algal blooms. Two years later that collaborative design project by Assistant Professor Jake Boswell and senior landscape architecture student Marty Koelsch has received a provisional utility patent, and is currently in review for a full utility patent from the U.S. Patent Office. 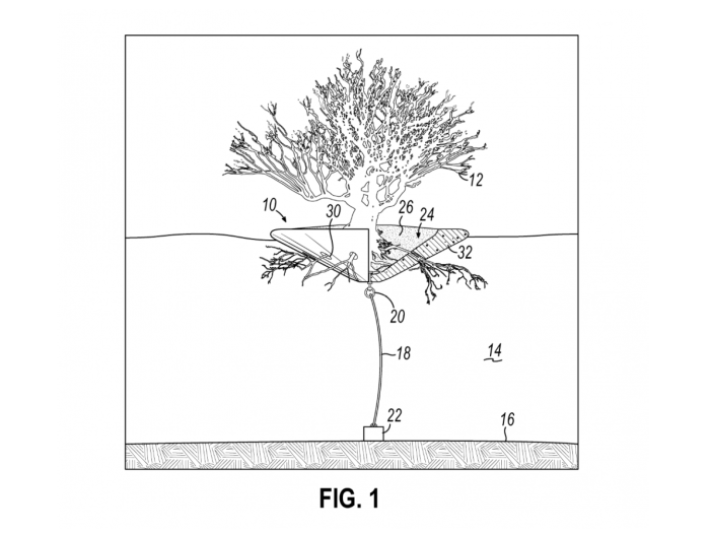 The original design concept received an honorable mention in the 2017 LA+ IMAGINATION Design Ideas Competition. To see if a floating forest could really work, Boswell and Koelsch made several early prototypes in the Knowlton School's Fab-Lab. Those early prototypes attracted the attention of Ohio State University's Technology Commercialization Office.

Boswell indicates that the decision to advance the project to a commercially viable prototype was based on its applicability. In 2014, algal blooms shut down the water supply to 400,000 people in the Toledo area. Those blooms, which now occur every year in many of Ohio’s lakes and reservoirs, are due to high amounts of nitrogen and phosphorus in the water. “Our design solution is to create a buoyant concrete vessel that permits a nutrient exchange between the plant and the water,” stated Boswell. “The plant’s biomass can help absorb the algae creating nutrients.” By decreasing light penetration, the vessel’s shade can also lower water temperatures, creating a less favorable environment for bloom outbreaks.

The vessel concept has advanced significantly since the first prototypes. The current concrete mix can withstand an average compression of over 1100 pounds per square inch—not bad for a material that is approximately half as dense as water, and a significant increase from the original baseline of 120psi. Experiments with the mix and the form of the vessel have also improved its load bearing capacity to almost 600 lbs. for a 4-foot diameter vessel.

Micro-glass spheres—essentially tiny buoyant particles—comprise part of the aggregate that is bound together by cement to create the vessel. “The challenging part has been maintaining buoyancy while allowing the vessel to take in water—to make it permeable—rather than creating buoyancy through water displacement like a boat,” commented Boswell. “All the buoyancy is actually caught in the poché of the vessel itself—allowing it to be full of soil and water and plants and still float.”

The team continues to tweak the form of the vessel as well as the composition of the concrete mixture. Hu, a structural engineer, has been testing the basic form for stability thresholds using a computer generated wave modeler. Burris, a concrete engineer, is working to advance the mix design. Gabor is researching potential nitrogen and phosphorus absorption from the water into the trees’ biomass. A six-month mesocosm study at Ohio State's Olentangy Wetland Research Park, set to launch this coming spring, will attempt to reveal the vessel’s true capacity for reducing nutrient loads under several different planting regimes.

Aiding in the team’s continuing fabrication work is a $15,000 Ohio State Sustainability Fund Grant. A $25,000 Sustainable and Resilient Economies Seed Grant will allow for further experimentation and optimization.

With continued success in the design and material of the vessel, Boswell recently applied for a full patent. Under the title, “Permeable Concrete Vessel for Creating Floating Aquatic Habitats,” the patent submission encompasses not just the concept of the vessel, but the concrete mixture as well.

“I really like the idea of a floating tree,” commented Boswell. The team’s plan is to make that happen with an installation of the technology at Chadwick Arboretum’s Research Lake in the spring of 2019.

by Knowlton School of Architecture Communications

A rising weapon against the coronavirus? Sewage.