A Trip to the Bog

Posted: November 20, 2017
Ohio once contained a diverse and abundant array of wetland ecosystems including marshes, swamps, fens, and bogs. Peat bog ecosystems in Ohio are of significant conservation concern, as only 2% of Ohio’s peat bogs remain intact, the rest having been lost to land-use conversion. Remaining sites have been impacted by drainage, disturbance and nutrient inputs from surrounding agriculture. Additionally, we currently have little evidence on the status, history or condition of those bogs that do remain.

Understanding the status of these ecosystems is vitally important as their unique combination of species, including many at the southern limits of the range in North America, and unusual soil and hydrological conditions, means that they can’t be recreated once lost. The drainage, agricultural use, and mining of peatlands has led to significant trade-offs between commercial exploitation and other ecosystem services that bogs provide, such as regulation of hydrological regimes and water quality, carbon sequestration and the provision of wildlife habitat.

To answer these challenges, Ohio Water Resources Center funded Professors Davies' and Bohrers' group at the Ohio State University to collate detailed data on the current and historic spatial distribution of peat bogs in Ohio and combine these data with ground survey to assess the relationship between land-use and site ecological condition. I was fortunate enough to accompany two of the researchers to one of their sites, Cranberry Bog State Nature Preserve.

The trip to the bog started with a short canoe ride across the stretch of lake separating the island from the shore. Cranberry bog was previously at the bottom of Buckeye Lake, but a chunk of the sponge-like peat broke off and rose to the surface. Once we arrived at the bog, it became so apparent how different the plants looked from the other side of the lake. Dr. Davies’ students, Julie and Yuchen, quickly identified some of the more prominent species. Different mosses, including the characteristic Sphagnum moss, carnivorous pitcher plants, and cranberry, of course, sprawled across the landscape. They also made sure to show me what the poison sumac looked like, and I quickly learned it was nearly impossible to evade (but still somehow managed to avoid a rash).

Yuchen and Julie sample from the well.Earlier in the season, there would have been more flowers including orchids. Yuchen was able to find one more cranberry still on the shrubs. Its flavor was more bitter than expected, but this made sense since the bog’s unique flora and ecosystem is a result from the acidic conditions. It’s not so much that these plants thrive there, it’s that other plants cannot grow and outcompete them. Many plants also have developed other measures for sustenance – the insect consuming pitcher plants are great evidence of that. 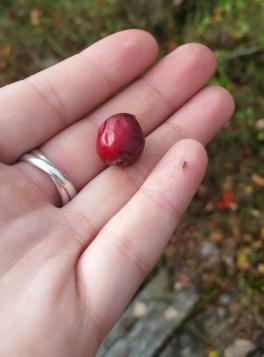 We made our way to the well, a small pvc pipe, about 3 inches from the ground. They took a few samples and measured the pH, which was about 3.2 – about the same acidity as orange juice. The other important parameters sampled were electrical conductivity which indicates the presence of ions. This information will help the researchers to develop better management tools and practices for existing bogs and will also help them learn how to better protect culturally important sites, like Cranberry Bog, and the habitat they provide for rare plants and wildlife.

Visits to Cranberry Bog can be organized through the Buckeye Lake Historical Society, but there are also other bogs in Ohio, such as Brown’s Lake Bog, that can offer a view of the unique landscape.

A rising weapon against the coronavirus? Sewage.